Over the past 5 months the startup advisory team has been working full-time researching and listening to problems in pain care from both patients and practitioners. We are now starting to move into developing the framework for our proposed solution. One great benefit of spending so much time learning has been the necessity to read. A lot. Here is a list of my 20 more influential reads during the journey: Becoming Wise, The Book of Delights, Dream Work, The Upstream Doctors, Upstream, Lost Connections, Prosocial, Together, The Mom Test, This View of Life, Zero to One, Big Magic, Option B, The Art of Gathering, Strangers in their own land, Factfulness, Joyful, Made to Stick, Upstream: Mary Oliver, A Thousand Mornings: Mary Oliver.

If I had to pick the three most influential, they would be Lost Connections by Johan Hari, Upstream by Dan Heath, and Strangers in their Own Land, by Arlie Hochschild. These books, more than the others have shaped several guiding principles driving the solution we are working towards. In a series of posts we will discuss these books in context of the problems we are exploring. The first book I am exploring through a series of blog posts is Upstream by Dan Heath

In Upstream Dan Heath relates the parable of two people walking near a riverbend as a small struggling child is being swept up in the current. They dive in and save the child, only to get out and see another child coming down the river. The cycle repeats itself again. Eventually, one of the hikers starts to walk up the river. Astonished, the other hiker asks why the first is leaving, given that there will likely be more children coming down the river. The hiker responds "I'm going upstream to figure out who keeps throwing all of these children in the river." The parable is salient for much of public health and life in general. But we believe it to be particularly salient for pain care. After conducting almost 40 hours of qualitative research interviews the following healthcare sequence is an almost universal experience. 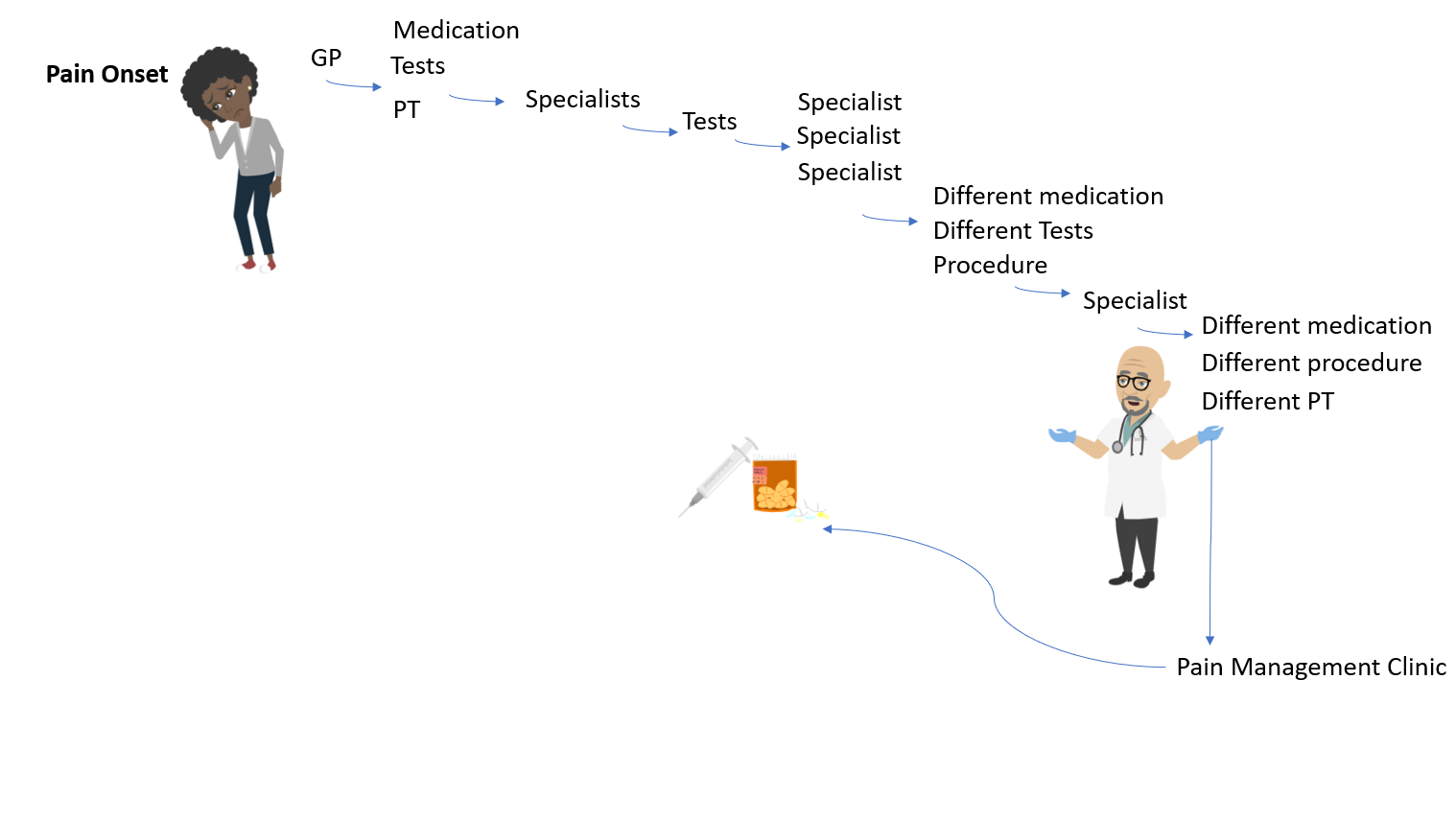 The traditional medical model is focused on figuring out what is wrong, which in many ways is sensible. Put another way, it would not make sense to focus exclusively on things like meditation, pain neuroscience education, and cognitive pain reprocessing at the expense of trying to determine if there is a serious physical issue such as a growing tumor or torn ligament. However, by focusing the hunt for the problem on increasingly narrowed concentric circles of specialization the healthcare system largely leaves pain management as a final, downstream afterthought of a dumping ground.

The toll of downstream pain care

The book Upstream also highlights that the best indicator of a system is whether it is working. It highlights that every system is perfectly designed to get the results it is getting. In the case of the current pain care system, the results are appallingly bad and the system is broken. Chronic pain care treatment currently costs 300 billion dollars a year. An additional 200 billion dollars is attributed to chronic pain's toll on lost or lower wages. And all this is excluding from the grave costs both financial and societal to the ever raging opioid epidemic.

One challenge of leaving pain management as a course of last resort is that the problem becomes increasingly more insidious the further downstream it gets. The process of hunting for a pain-fix is not only expensive, time-consuming, and often ineffective, but is also deeply emotionally traumatic for patients. And what's more, this trauma is more than simply an unpleasant but benign side effect to the pain experience. As modern neuroscience shows, the more our brains repeat thoughts and associations the more they become strengthened and hard-wired. Thus, the further we wait to address the emotional toll of pain the more resistant the brain becomes to change. 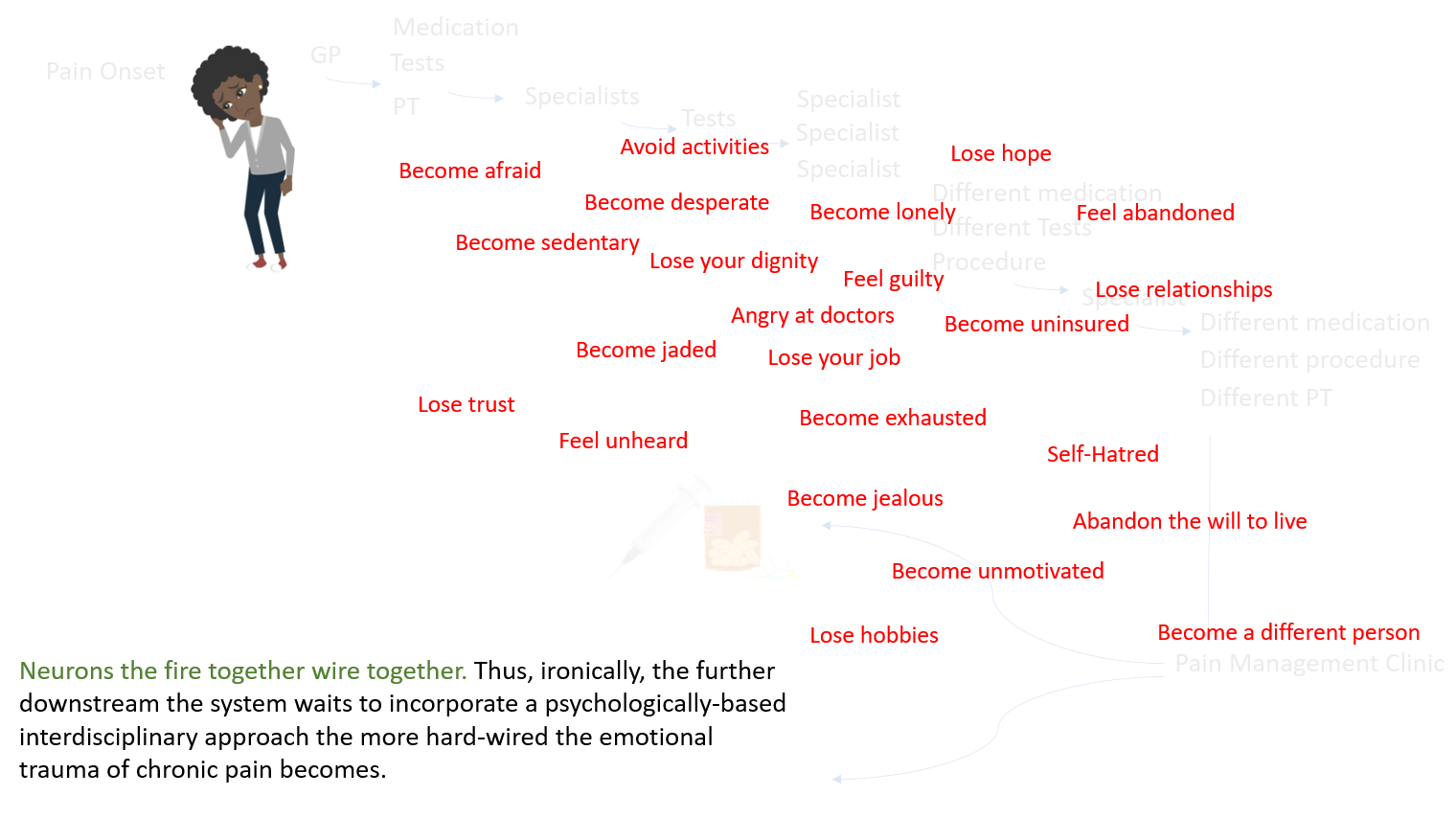 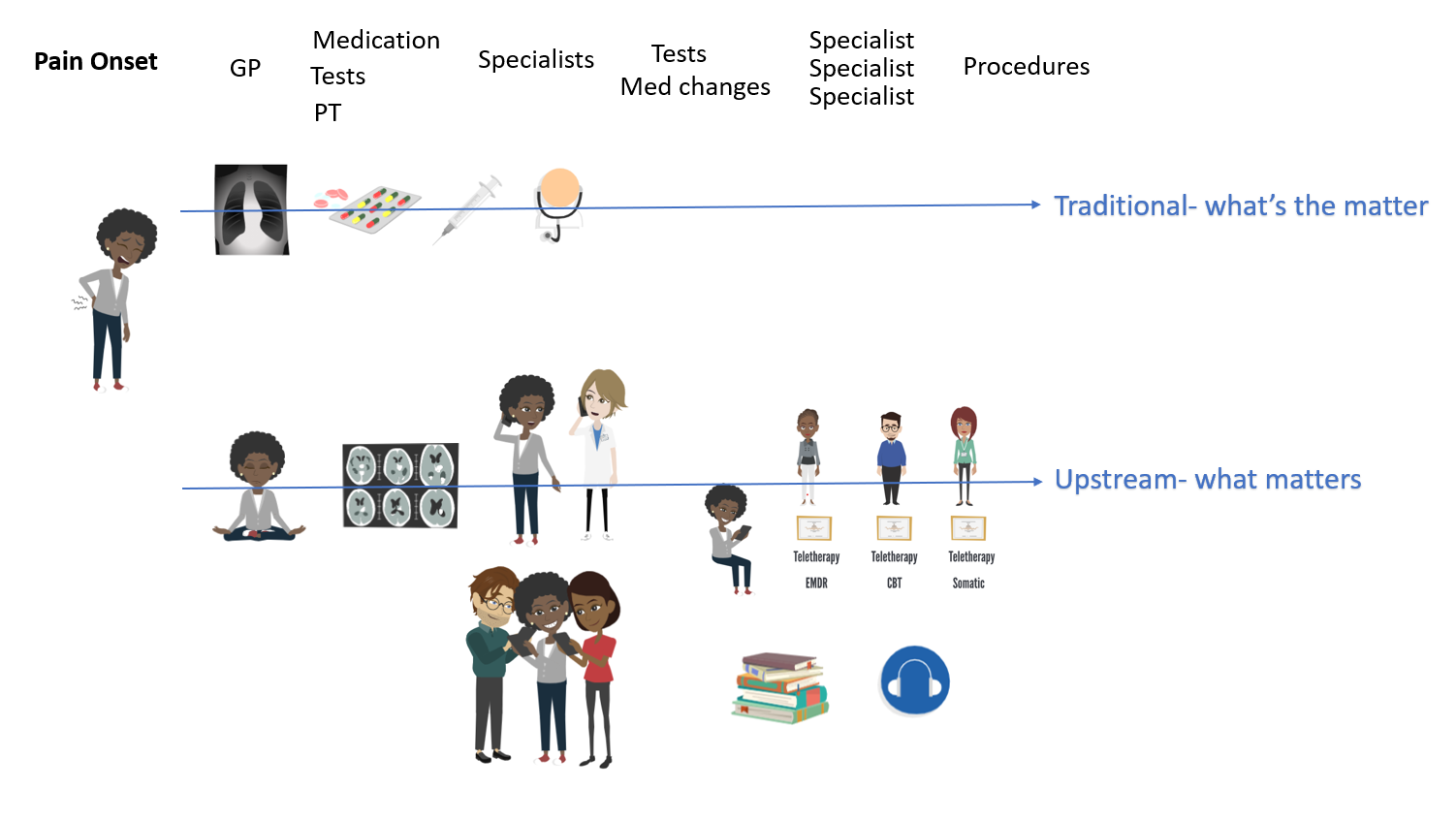