JoyPop- The wisdom of a bee. 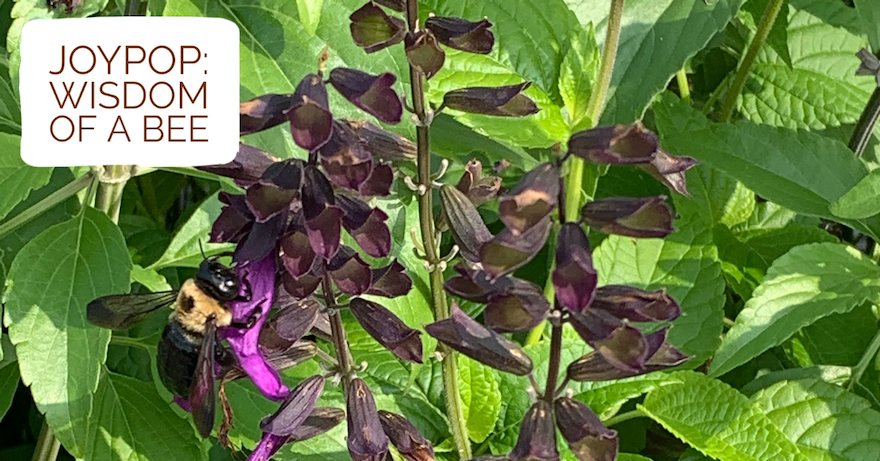 5 super-powered eyes. No ears. 6 mm long. And a lifespan of 2-3 weeks. The invisible beauty of the Bumblebee.

This weekend my daughter and I found a bumblebee pollinating the last of late summer’s nectar. Immediately my daughter was transfixed with the infectious fascination too often unique to children. The mysterious furry yellow creature diving from flower pod to flower pod.

A wonderful creature to observe. But sometimes to be mindful of what can we see is less important than to be humbled by what we cannot. Our tendency to cap our appreciation for the world at what our human eyes and brains can recognize is in my estimation one of the most innately self-important and tragic side effects of our species.

The complexity and wisdom packed into the brief and beautiful life of a bumblebee is flatly staggering. For purposes of brevity lets table the magic of their colony work distribution systems, their wax production capacities, their symbiotic relationship to the flowered world, and their ability to communicate with each other through movement patterns. And instead focus solely on their unique navigational ability.

When we humans notice a flower, we see----well---- a flower. We might comment that it is “pretty” or “colorful” or a “unique shape.” But that is about the limit of the human eye’s ability and human brain’s attention to admire. And because of these limitations the flower remains an “it,” not a truly living being. A bumblebee sees a flower as a veritable symbiotic homing-beacon of information, critical to not only its own survival, but the survival of our planet. Capable of detecting atmospheric electrical fields, bees determine those flowers most ripe for pollinating. They can discriminate tiny temperature differences between flower types to triangulate which flowers are likely to be best harboring pollen, and can even can leave scent markings behind that other bees can measure to determine when the last of its partners has pollinated a flower.

And we haven’t even touched on their eyes! Bumblebees have 2 sets of eyes capable of seeing an entire ultraviolet light range invisible to humans as well as polarized light spectrum, also invisible to humans. The ultraviolet light source allows them to detect pollen levels and the polarized light vision serves as a natural GPS allowing them to circumnavigate the world using light source as the only directional cue.

Growing up I was always perplexed at the age-old conversation starter- if you could have a meal with one person who would it be? Why on Earth is it assumed we should choose a human!? Whatever we can learn from any one human, brilliant as he or she may be, is marginal compared to the learnings from the other 8.7 million species on Earth. I would much prefer a meal with a bumblebee.

This week when you look a bug, plant or bird resist thinking of it as an “it.” Try exploring the Potawatomi tradition of honoring the animacy of our natural world by addressing the Earth’s inhabitants as intelligent living beings- if for no other reason than because they are.